By Nicholas Zettel and Jessica Kursman

Scrap metal shredder General Iron has announced they are are moving from their current Lincoln Park site to a proposed site bordering the South Deering and Hegewisch community areas in 2020. The move would disproportionately impact Latinos, single female mothers, children under 18, elderly individuals over 65, and low-income residents.

The move coincides with developer Sterling Bay’s proposed Lincoln Yards project, which is transforming the near-north side’s Planned Manufacturing District from its historic industrial landscape into a mix of residential, commercial, and entertainment uses.

In a recent Chicago Tribune article, General Iron’s crisis communications specialist, Randall Samborn, cited the smaller population surrounding the proposed site to suggest that General Iron will be farther from residents. According to the Samborn, about 6,800 people live within a mile of the Southeast Side site, compared with about 47,500 who live that close to the scrap shredder’s current operation west of Clybourn Avenue between North Avenue and Cortland Street.”

While it is true that residential uses surrounding the proposed Lake Calumet site are less dense than those in Lincoln Park, this narrative overlooks the differences in the populations of the proposed Southeast site and the current Lincoln Park location. When compared with the existing Lincoln Park site, residents living within one mile from the proposed site are more likely to be identified as Latino; under the age of 18; older than age 65; and a female-headed householder with children present.

Residents identified as Latino will be more impacted by the proposed General Iron site than any other demographic group. Within a one mile radius of the proposed General Iron site, more than 67 percent of the population is identified as Hispanic or Latino, compared to approximately 10 percent of the population within a mile radius of the existing Lincoln Park site*.

The proposed General Iron site is also within a neighborhood with notably lower incomes than the current site. The Lincoln Park site household income is $69,000 –more than three times that near the proposed Southeast side site ($20,000). 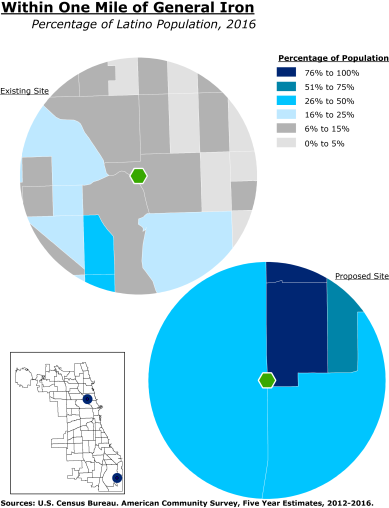 Furthermore, single-female households will be disproportionately affected by the move. An estimated 30 percent of Southeast side households within a mile radius of the proposed General Iron site are female-headed households with people under age-18 present. In contrast, approximately 5 percent of households surrounding the Lincoln Park site are headed by single women.

Land Use and Vulnerable Populations in the Calumet Region

The proposed move offers an opportunity to consider specific population needs of young and elderly residents, residents living in poverty, and single-parent households. Furthermore, the move illuminates a greater conversation of environmental and racial equity as it pertains to land use and zoning in the Calumet Region.

Our last blog post mapped out the change in spatial distribution of income between 1970-2016 and found three distinct “cities” within the City of Chicago:

As we illustrated, Chicago is growing more segregated by income over time. And it appears, so too by age. For instance, of the more than 673,000 people 19 years or younger, 59% live in City Three.

Most young people in Chicago live in lower income communities of color.

City Three is predominantly non-white and young, with the largest population of individuals (394,175) under the age of 20. This accounts for nearly 60% of all young people in Chicago. When broken out by race/ethnicity, 48% of these young people are Latino and 41% are Black. In contrast, only 7% are White and 3% Asian. 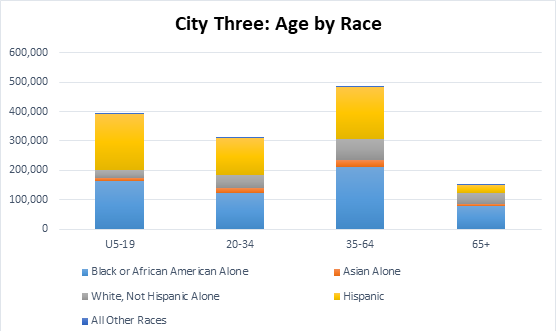 By comparison, City One is home to nearly 104,000 people under the age of 20 – about a fourth of the number of young people in City Three. In stark dissimilitude to City Three, 50% are White, while only 17% are Black and 20% Latino. 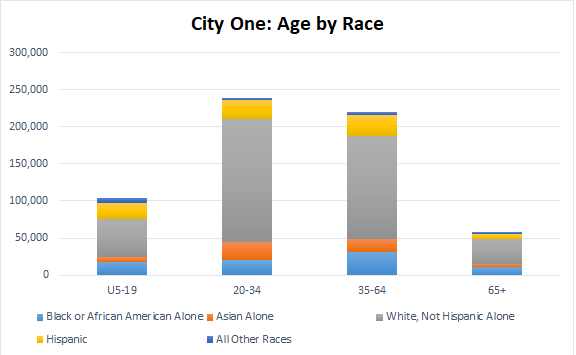 Most older people in Chicago live in lower income communities of color. 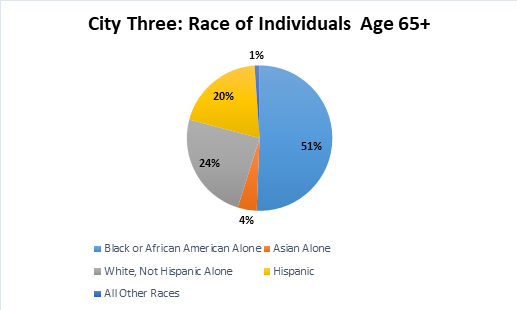 In sum, City Three is by and large home to a lot of young people and a large aging adult population, while City One has only a small fraction of each. What City One does have is a predominance of White and Asian millennials. Of all millennials in City One, 70% are White. Furthermore, over a quarter of City One’s entire population is White and between the ages of 20-34, comprising the largest age and racial cohort in all of City One. Finally, of all Asians living in City One, nearly half are millennials.

These data raise several policy questions, including the distribution of educational resources across Chicago.

For example, how do age disparities throughout the City affect access to education? Previous research has shown a correlation between rapidly rising home prices and school closures due to under-enrollment.

Stay tuned for our next blog, where we will take a look at housing cost burden across our three cities.

The EDA University Center @ UIC was launched in mid-December 2016 with a five-year investment by the federal Economic Development Administration (EDA). The EDA Center is housed in the Nathalie P. Voorhees Center for Neighborhood and Community Improvement (Voorhees Center) in the College of Urban Planning and Public Affairs (CUPPA) at the University of Illinois at Chicago (UIC).

The mission of the EDA is to lead the federal economic development agenda by promoting competitiveness and preparing the nation’s regions for growth and success in the worldwide economy. To promote its economic development mission, EDA leverages the resources of academic institutions by designating them as EDA University Centers; the EDA University Center @ UIC joins more than 40 university centers across the nation. END_OF_DOCUMENT_TOKEN_TO_BE_REPLACED

The core mission of workforce development agencies is to help workers and businesses transition in a changing economy. These agencies constantly strive to align their policies and programs with projected labor market demands. They also try to influence future demand by increasing the supply of workers with certain skill sets, with the end goal of aiding the growth of targeted industries (e.g. green industries) in a region.

O*NET provides key components of the data needed in this process. Below I discuss three specific areas where O*NET OnLine could be a primary data source for workforce development agencies in advancing their goals. END_OF_DOCUMENT_TOKEN_TO_BE_REPLACED

This is the first of two blog posts exploring O*Net Online, and how it can be useful for workforce development agencies in advancing our green economy (Part II is here). The online tools and information provided by O*NET, the occupational information network, and its complementary databases can help with defining green occupations and analyzing skill gaps, transferability and educational requirements.

The transition to a green economy is causing big changes in employment demand and worker requirements such as tasks, skills, knowledge, and credentials. In this process, the importance of systematic, up-to-date data is critical in advancing workforce development goals. END_OF_DOCUMENT_TOKEN_TO_BE_REPLACED

Raising the minimum wage stands to impact Illinois workers’ ability to sustain families and cover expenses including high housing costs. Whether in the form of rent or mortgage payments and maintenance costs, housing costs make up the largest monthly expense for most households. However, a common concern is that raising minimum wage may actually increase unemployment.

Findings from our report The Impact of a Minimum Wage Increase on Housing Affordability in Illinois suggest that raising the minimum wage will not only increases housing affordability, it will raise tax revenue and have minimal impact on employment levels. This report is timely, as minimum wage bills make their way through the legislative process. END_OF_DOCUMENT_TOKEN_TO_BE_REPLACED

the voorhees center for neighborhood & community improvement
Create a free website or blog at WordPress.com.